And now, a post about the chocolate cupcakes I took to our niece's graduation party.
♥ 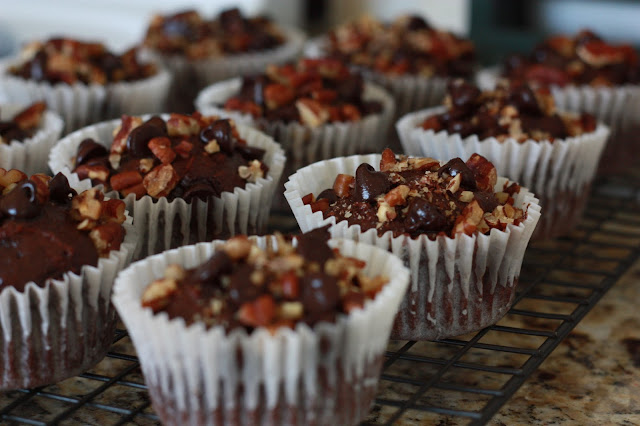 There was a cake that my mom used to make when we were kids. It was a no-frosting cake, super moist and chocolatey and we loved that cake! The recipe is one that I wanted to get my hands on, and having gone through Mom's recipes after she left, it was one that wasn't in the mix. 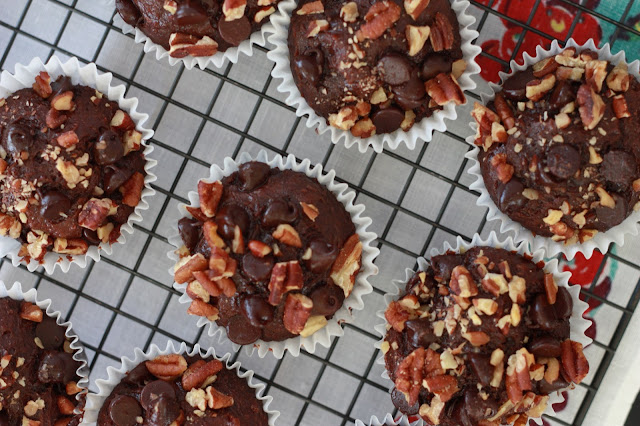 I searched online and found some similar versions, but nothing that sounded just like Mom used to make. When I finally mentioned it to my sister she said, "Oh, I know how to make that!" Awesome! 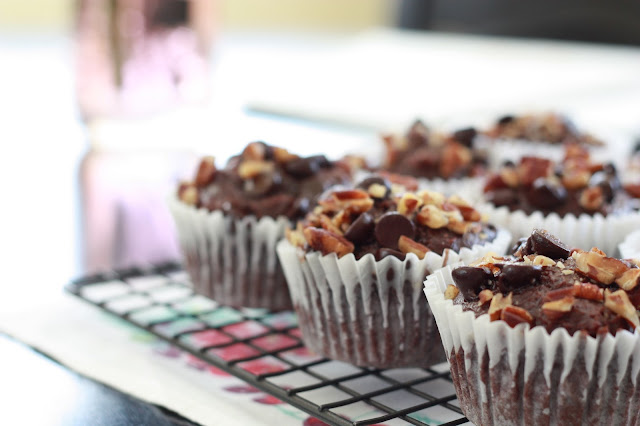 1 3.5 oz box of chocolate Jell-o pudding and pie filling {the kind you cook, not instant}
2 cups milk
1 chocolate cake mix
1 to 2 cup chocolate chips
1 cup chopped walnuts {I used pecans because that's what I had on hand}

1 - In a large saucepan, cook chocolate pudding as directed on box. Stir in chocolate cake mix until smooth
2 - Spread in a 9x13" pan that has been greased and floured
3 - Sprinkle chocolate chips and nuts on top
4 - Bake at 350° for 20- 30 minutes (cupcakes for 12-14 minutes) until toothpick inserted in center comes out clean

Labels: food, for the love of chocolate, recipe

This sounds/looks so yummy - a recipe I might even break my "no grains, no sugar" diet for! You know that several companies make "pudding in the mix" cake mixes? Might make it a bit simpler to make. I could also see adding peanut butter chips... and drizzling caramel in the batter... oh yum!

Ooh! I would love a box please Deb! Penny would be thrilled to have a box and make those cakes as she just LOVES her baking! (And I love eating it lol!). Cakes look yummy!

So glad you found the recipe - I can hear your disappointment and personally would have been crushed if something like that had been lost.
Rinda

re: pudding already in the cake mix... You need the kind that cooks separate on the stove, then you stir in the dry cake mix to that. That's all for the batter, then you can add whatever chips/nuts you want. I did have one photo of the pudding on the stove with the dry mix being poured in, but I wasn't blog-worthy. :o)

So pleased you found the recipe! They look delicious.

Gosh, they look lovely, those little cup cakes and I have never seen a cake recipe like this! I wonder what our equivalent might be ..You must have been thrilled to get the recipe after all your hunting!

Fiona@staring at the sea said...

I was so glad to read on and find that your sister knew how to make the cake. I would love a box of the pudding mix please, if you still have one to send. I am intrigued.

Now, after making Marti's lemon cheesecake I can hardly pass up the opportunity to try this one! We have cake mixes here and something I think would be the equivalent to a pudding mix ... I'll have a look and see what I can come up with.

What a yummy post. I am always amazed at some family things. Someone is researching or searching for something for ages and one day, maybe on a get-together you mention your 'search' and someone says "oh! I have that" or "I know how to do that"! I never learn to go to the family first!

These remind me of our favorite decadent brownie recipe. I'll definitely be trying these this summer!

I'm thinking I can use the box you sent me for this!...please say yes..they look fab!!
Alison xx

They look yummy. I'm so glad your sister knew the recipe.