The Princess and The Ghost

Ok, so my title might be a bit of an exaggeration,
but here's my not-so-spooky version of
A Princess and a Ghost.
♥ 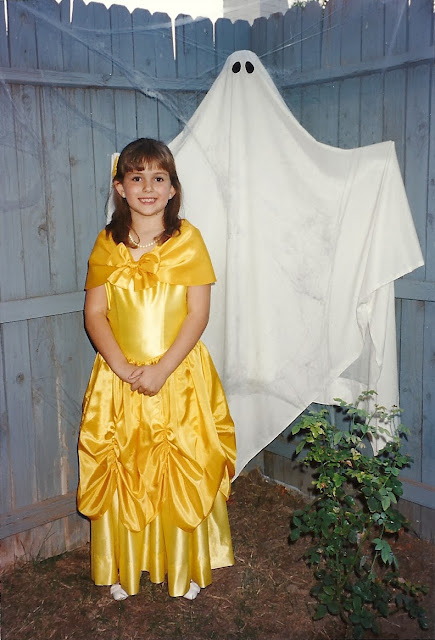 My story for Sian's Storytelling Sunday this month isn't much of a story. It's just a photo of my eight-year old Carrie dressed in a Belle costume I'd made for her that year, standing in front of a ghost we created as a decoration for a small Halloween party we held. I made all of Carrie's costumes when she was younger, and she will tell that this Belle dress was her all-time favorite.

The ghost was made of a bed sheet draped over a Styrofoam ball, strung up with fishing line and suspended in the corner of our fence. It made a fun backdrop for photos that night - an unknowing successful attempt at an early photo booth.

Her friends from school came dressed in costume too, and each brought a bag of candy to be used in a candy exchange. The girls played games, ate snacks, and giggled a lot.

I'll admit to feeling very nostalgic when I see photos of my sweet little girl in Halloween costumes I made for her, and I dream of the day that I'll be called upon to fashion a small costume for a grandchild. Someday...

What a lovely story and photograph!!

you are clever making that, I bet they all had fun.

So cute - - My children didn't really do Halloween - but I did make costumes for them for the summer carnival - - Love the story and photo. Jen x

If my experience is anything to go by you will most definitely be called upon to creat costumes for grandchildren.... "grandma I need to be a rabbit with brown fur" Grandma I am going to be a character from a book I need a red suit and a black mask.

Aw, doesn't she look like a proper Princess? funny, I was just thinking today about the Wednesday Addams costume I made for TSO when she was ten and wondering if I might get the chance someday to make another one! Little E's Mum doesn't need any help: she is a better sewer than I am. A lovely story!

She still has that same fab smile!
Alison xx

How cute! I made Penny a Belle costume to wear to a fancy dress party! Hope that you do have grandchildren one day to make costumes for! I keep hinting to Ben, don't think Penny will ever have children!

Adorable! My Grand-daughter would love this costume! I do not sew much but I'm pretty sure I've purchased her every princess/fairy costume on the market! Nice photo booth!

No wonder it's her favourite....gorgeous.

I love it! And it looks like she was a cutie right from the start!

How precious, Deb.....and that costume is so gorgeous. Talented, you!!!

Wow, Deb, you are so talented! Your daughter looks so lovely in her gorgeous gown.

A lovely story and a beautiful photo, you are so talented! x

Oh Deb what a lovely photo and how alike our girls are. I made Gracia a Belle costume for a fancy dress party and she would put it on every day after school and even went to church with it on on Christmas day but she accessorised it with Angel wings and a halo rather than her usual gloves and handbag! I must dig out the photo to email you.

So cute! I made lots of Halloween costumes in my day. We still have a couple of them, but I passed when Matt asked me if I'd like to make Skylar a bumblebee costume for this year. I think that's beyond my current talents. Fortunately, they found one.

What a great looking picture Deb and boy did you ever do a great job on that dress for your princess.

What a sweet photo! It probably won't surprise you to learn that I have NEVER sewn a halloween costume! LOL! Bad mom.
Rinda

Wow - what a beautiful costume & such a perfect photo booth set-up! So much fun to look at older photos & relive those memories - thanks for sharing!

I'm impressed by your sewing skills and I wish I could conjure up some dress up outfits like that for my girl! I wish we really embraced Halloween here. I remember your candy corn and I'm going to have fun with it this year!

OMG! My mom made me the exact same Belle costume for Halloween one year, too! And it is my most favorite costume I have ever worn! What a coincidence.

She makes quite a pretty Belle. Great snapshot and story.